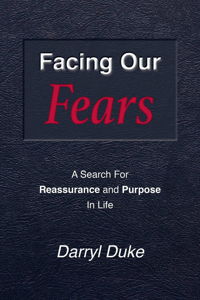 If you’re reading this, something must have caught your attention—and maybe there’s even a reason for it. My hopes are that whatever the reason, the words “alcoholic” and “God” don’t deter you from reading the entire book. This is because my story isn’t about alcoholism or addiction and has nothing to do with the God of the Bible. In its most basic form, this is a story of change through growth, both spiritual and personal, and how it helps us become more confident in ourselves, to love ourselves, and finally to be happy with who we are.  —Darryl Duke

In this well-written part memoir, part self-help book, Darryl Duke invites readers along on his personal journey from fear to belief in himself.

Darryl experienced a lot of uncertainty as a child and used his imagination to escape the fears he felt. As he grew into a shy and insecure teenager, he often acted out in vain and pretentious behaviors as a way to overlook his fears and feel better about himself—something he would continue to do into his adulthood.

He would also find that alcohol made him feel better about himself. And although he didn’t drink every day, it would eventually become a problem for him. Finally, after many unsuccessful attempts to quit drinking on his own, he went to Alcoholics Anonymous.

For several years, AA and the Twelve Steps helped Darryl face his fears and grow more confident, and he also began to love himself. But when he longed for answers that AA couldn’t give him, he searched elsewhere.

It was during this search that he started to believe more in himself, and the possibility that something created life for a reason. A combination that finally enabled him to be happy with who he was and filled him with a sense of purpose.

Available on Kindle and in Paperback at Amazon.com