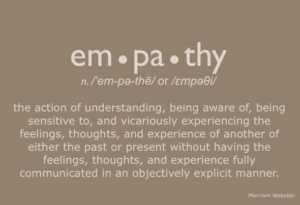 Before I get into the reason why I, who proclaims we should try to practice more love, kindness, understanding and tolerance towards others, am writing what is basically a critical post about Dr. Phil, let me say a few good things about him.

He is educated and seems knowledgeable about many different subjects, and he appears to be confident in both his abilities as a talk show host, and himself. He has also been reported to have helped quite a few people over the years, including Oprah Winfrey, for goodness sake, when she was going through the much publicized lawsuit brought against her by the beef industry. And finally, I want to believe that he’s sincere about wanting to help others.

What I doubt though, is what Dr. Phil knows about empathy. I understand some of the people on his show have done horrible things and in no way deserve much respect for it. However, there are people who come on his show that while not always asking for it; are in some way actually crying out for help, and they need to be handled differently than in his usual manner.

While I have never been a big fan of Dr. Phil, I did tune into his show sometimes when a particular topic interested me, especially if it pertained to addiction. There was actually a time when I tried to like him despite his behaviors toward people, but this ended quickly as I became more and more frustrated by some of the things he said to those he was supposed to be helping.

On one show about a husband who puts his mother before his wife, Dr. Phil boldly told the wife in his southern draw, “I’m perfectly capable of asking my own questions thank you,” after she angrily blurted out for him to ask her husband who he had lunch with the day before. She obviously knew that it was with her mother in law, but it was also obvious, to me at least, that replying to her like that was more for his audience than it was to help her.

I won’t even get started about the way I’ve heard him talk to people with addictions. It’ll just anger me and make me say mean things here. My point is that even though it’s important to control things in certain situations when helping people, I feel Dr. Phil too often chooses to grandstand instead of answering people in an empathetic and professional manner. It almost seems like he needs to try to intimidate the person he is responding to.

Sure he also says nice things to people on his show, and at times he can even come off quite likable, but this doesn’t detract from my perception that sounding knowledgeable and bold often seems more important to him. I won’t argue that his audience obviously likes it, but what purpose does it serve other than to make him look good?

He has become quite a TV personality due to his bravado and bold behaviors, and he has certainly maintained a highly rated TV show. But it makes me wonder if he hasn’t simply become better at being a celebrity than at actually helping people.

Maintaining a popular talk show and the celebrity that comes with it requires continued high ratings, and there have been more than a few times that Dr. Phil was accused of going after them. Brittany Spears comes to mind. Plus many of his shows and their titles have become more extreme over the years, which I believe attests to this.

Some shows, like “Heroes to Monsters” for example, have even caused hurt and anger. You can read more about it by clicking the link Dr. Phil faces backlash from Veterans for PTSD, but apparently many veterans were upset with the show and felt that an opportunity was lost to help battle the stigma associated with PTSD. I certainly feel that way about some of his shows on addiction.

Dr. Phil may be knowledgeable about many things, and I won’t deny that perhaps I could learn a few things from him. But when it comes to identifying with and understanding another’s situation, feelings, and motives, and treating them with love, kindness, understanding and tolerance, I think I could teach him a few things too.