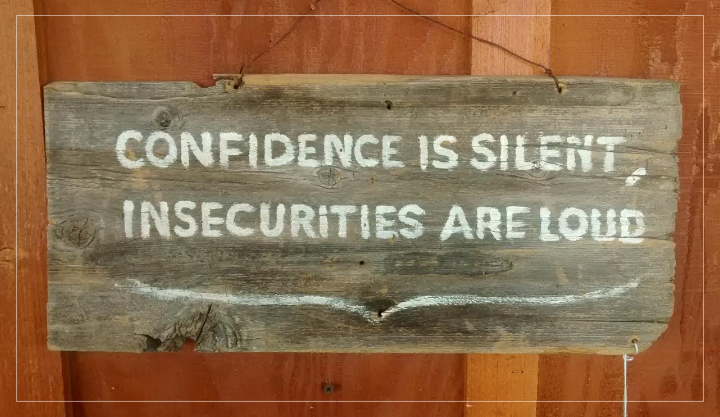 It seems that quite a few people today, with apparent insecurities about themselves, act as though they have a very high sense of self-esteem. I first noticed this through the arrogant and often outlandish behaviors some of the teenagers I worked with displayed. Although it is, of course, understandable for young people to act in such ways due to insecurities, seeing older people behave like that made me wonder if they really had a true sense of self-worth. I was actually able to talk to my teenagers about their behaviors and my own as a young man, and while many of them admitted to feeling insecure, only a few said they had low self-esteem. This wasn’t much of a surprise, as it was hard to get them to admit certain things about themselves sometimes. After pressing them a bit more, I’d end with the question, “Can you look in a mirror and say ‘I love you’ to yourself and mean it?” This usually made them laugh, but almost all of them would say they could. I would rarely challenge them any further on the issue. I knew time would tell if they were being honest, not just with me, but with themselves. But since then, I’ve talked to people of all ages about the type of behaviors I see today, and I’ve figured out something very important.

Starting in the eighties, changes began taking place in many of our movies, TV shows, magazines, songs, and commercials, and over time, as these changes kept becoming more extreme, they caused two generations of people to display a sense of vanity and self-importance that belies their true insecurity.

First, look at how our movies and TV shows became more extreme. Not only has there been a continual increase in the amount of crime, violence, sex, and drug use shown, but in some cases, these things have actually been made to look glamorous. Also, think about how music has changed. Little by little, more songs came out with lyrics that basically glorified sex and violence and made the pursuit of money and fame seem like the all-important goal that everyone should have. Then there are the TV commercials that few could argue haven’t become more extreme. Although they’ve always been a way for businesses to advertise in clever ways and thus increase sales, they have used a lot more science and psychology over the past several years. Studies show they have the ability to affect people of all ages, making them think they won’t stack up unless they use, wear, or own a certain product. Don’t believe me? Take a look around the next time you’re out and about.

Unfortunately, these extreme (and, I must add, often negative) changes don’t stop there. Our video games have become increasingly more violent and now project a level of realism that can’t be psychologically good for anyone who plays them all the time. Then, of course, there’s the Internet. Although many good things can be found when browsing the World Wide Web, it’s certainly an outlet for extremes of all kinds. From pornography and violence to really outlandish behavior, the Internet became a way for people to watch almost anything they want and express themselves any way they want. Again, there are many good things on it—positive videos to help others and even instructional videos to help people learn how to do a number of different things. But we rarely hear about the good things found on the web. The bad things, sadly, often include the erratic, attention-seeking behavior of people who want (and sometimes need) to feel like someone special. It seems that the bar has been raised to encourage us to be something we’re not. And it has been lowered for academic achievement and family values. Add in the news media and its persistent bombardment of us with awful events, and perhaps you can better understand why we have, in effect, become a desensitized nation and why some people act the way they do.

Although everything I’ve talked about can and does have an adverse effect on us as a society, our youth seem to be affected the most. Young people have become more desensitized due to these extreme changes, and while many show good manners, do well in school, and have career goals they’re willing to work toward, some display behaviors that at one time simply weren’t acceptable. Sadly, still others act out in bizarre ways in hopes of reaching some form of perceived stardom. And while I’m sure the attention they get makes them feel good about themselves, this feeling can be fleeting, and I have yet to see proof that these types of behavior build a true sense of confidence and self-esteem in anyone. I have, however, seen proof that trying to be a better person than before can open up the door to the type of self-love we need to be happy with who we are.