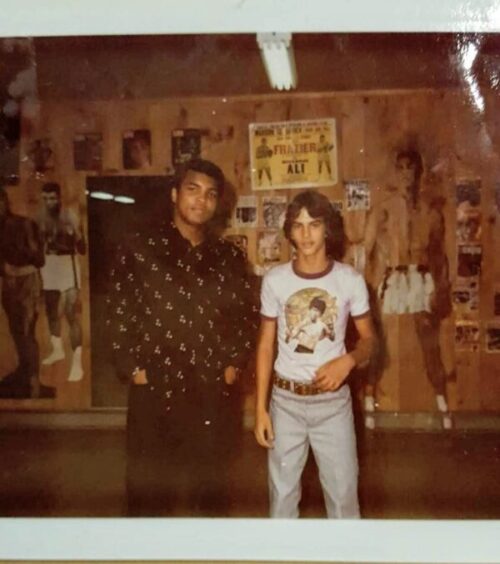 Today marks 5 years since Muhammad Ali passed away. The first time I met him was at his training camp in Deer Lake, Pennsylvania. It was the summer of 1975 and I was just 15 years old. He wasn’t happy about a Bruce Lee T-shirt that I had on and neither was I. It was my only choice that morning. (I guess my mom hadn’t washed all the ones I had worn that week?) But I got over it after seeing my idol and soon-to-be role model.

I began boxing that same year and won a Golden Gloves in 1976. Something called The Middle Atlantic Amateur Athletic Union Championship. I was so proud that I took my trophy to school to show it off. Truth was. That I was very insecure and needed a self-esteem boost. But sadly, the adulation wore off and girls and alcohol slowly became ways to boost my self-esteem. However, that’s a whole other story.

I’ll never forget that first meeting with The Greatest. He always made time to talk with his fans and that day was no exception. I’d meet him three more times in my life and I was just as excited as the first time I saw him. I never met him in my sobriety, though. But he made such an impression on me that throughout my 25 years sober, I have tried to show the same level of love and kindness toward others as he did.

I don’t have the level of faith that he had. But my hope, and somedays belief, that something rather nothing created life and the Universe for a reason has helped me during troubled times when nothing else would, and I am grateful for that.

I am also grateful that Ali took the time to say hello to an insecure teenager and ask if he wanted a picture. This photo helps me remember the insecurities and all the fears I had back then that would affect me for many years to come. But that too is a whole other story.